The story of Clark Stanley, the original snake oil salesman 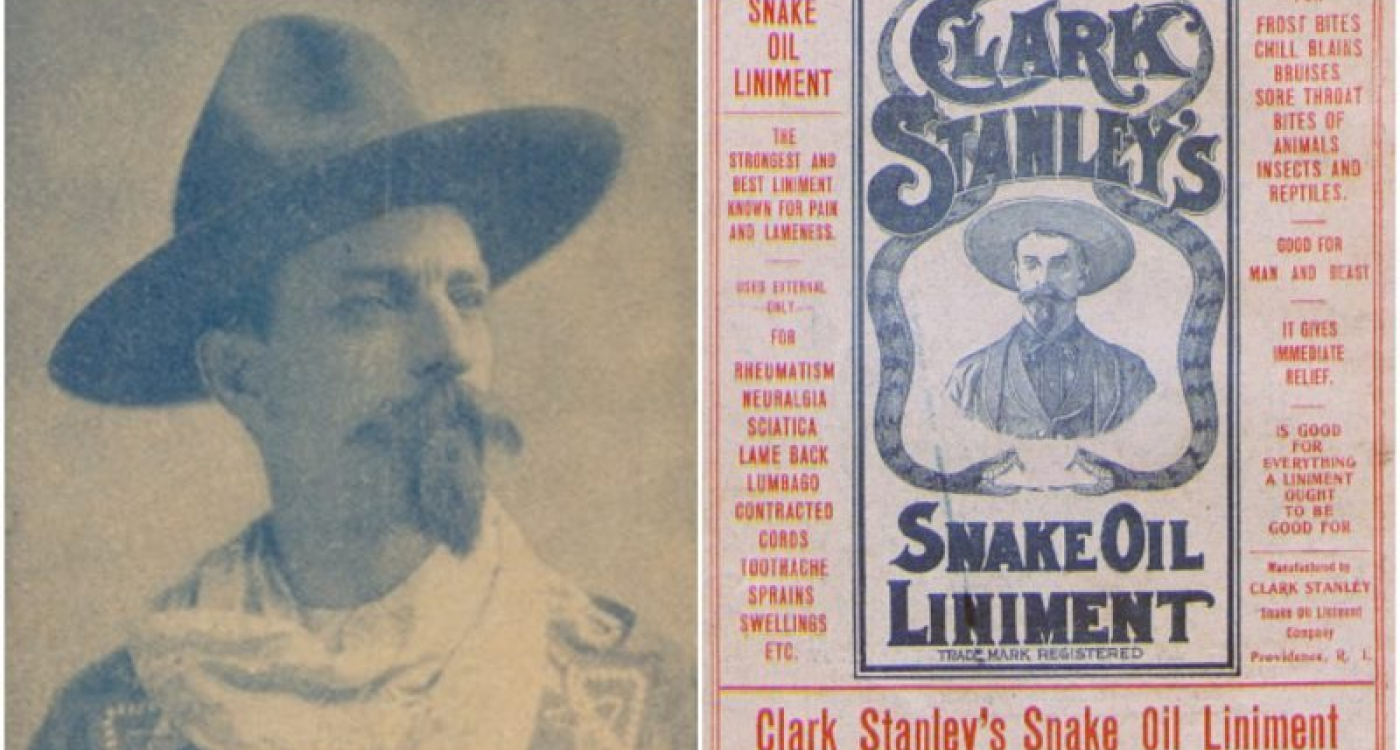 Imagine: you live in the Wild West in 1893, and there’s nothing good on Netflix that night. So what do you do for entertainment? Lucky for you, there’s a medicine show in town performed by a man who calls himself the Rattlesnake King. He’ll kill and boil a snake right in front of you, and then he’ll try to sell you his patented snake oil. Did you know it cures everything from rheumatism to partial paralysis? Only 50 cents a bottle!
‍

This so-called Rattlesnake King was named Clark Stanley. He used to be a cowboy, but now he’s patented the Snake Oil Liniment that is going to make him rich. “Good for man and beast,” the bottle read. “The most remarkable curative discovery ever made in any age or country. A liniment that penetrates muscle, membrane, and tissue to the very bone itself, and banishing pain with a power that has astonished and convinced two generations of intelligent people.”
‍

Shockingly, most of these claims are true. Real snake oil actually does help with aches, pains, arthritis, and bursitis. It’s basically the 19th-century equivalent of Icy Hot–a topical salve that relieves muscle and joint pain. The problem? Stanley’s snake oil was not the real thing. Although it is interesting that instead of claiming it was a cure-all, he stuck to claiming it could cure only what real snake oil could do.
‍

In order to make real snake oil, you need to boil not a rattlesnake, but a Chinese water snake. When Chinese immigrants came to America to work on the transcontinental railroad, they brought their traditional Chinese medicine practices with them. The high concentration of Omega-3 fatty acid in Chinese water snakes made them a truly therapeutic method for treating the aches and pains railroad workers experienced from their backbreaking labor.
‍

Enter: a literal American cowboy who was himself tired of manual labor and looking to make a quick buck. Ironically, Clark Stanley did credit traditional medicine practices with giving him the recipe for Snake Oil Liniment, but he claimed it was the Hopi Native American tribe, not the Chinese, that showed him its healing powers.
‍

To add to the irony even further, Stanley wrote a book about his experiences as a cowboy-turned-snake-oil-salesman titled The Life and Adventures of the American Cowboy: Life in the Far West. In the book, Stanley cautions people against selling fake versions of his fake snake oil.
‍

Oh, and Clark Stanley’s snake oil didn’t even contain snake. When federal regulators seized his product in 1917, they found it was a concoction of mineral oil, red pepper, turpentine, and cow fat. But by that point, he had already been selling the product for 24 years.
‍

Clark Stanley’s trial for misbranding his product and "falsely and fraudulently represent[ing] it as a remedy for all pain" was a turn–of-the-century media circus, but in the end he was only charged $20 (about $429 in today’s dollars) for all the damage he had done. Medicine shows, however, didn’t truly die out in the United States until the 1950s. Maybe it had to do with the fact that there was finally something good on TV.